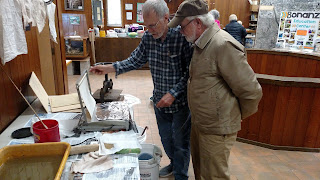 The Meander Arts Crawl was October 5-7, 2018 and Bonanza Education Center was stop #38 along the way, the furthest "upstream" of all the stops that generally follow along the Minnesota River Valley. Big Stone Lake Stories artifacts and leaders were represented at this stop so that visitors could learn about the camp. Visitor learning about paper-making from Don Sherman Camp Artist Organizer, Don Sherman showed visitors how to make paper, including the paper made of aquatic invasive weeds - an activity he'd shared with campers over the summer. The summer techniques and results were on display along with other drawings, paintings, and sculptures from his studio. Don discussed how different natural materials have different properties for paper.  Some hold together more, others can be made thinner, and others he uses for texture and color. A summer camper, Kirby, stopped by and was pleased to discover that his idea to use clay from Bonanza was incorporated into some of
Post a Comment
Read more 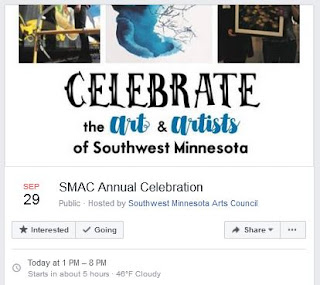 Link to Facebook Event Page Southwest Minnesota Arts Council (SMAC) is hosting their annual celebration in Ortonville today. Members of the Big Stone Lake Stories team will be present and available to share project stories. Congratulations on a successful year, SMAC!  - And thank you. With your support, Big Stone Lake Stories was a success and we look forward to sharing more project stories as project documentation proceeds.
Post a Comment
Read more

The Team Reflects in Article by Dillon Dwyer 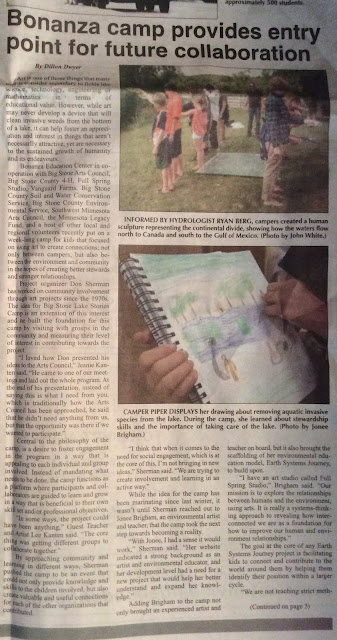 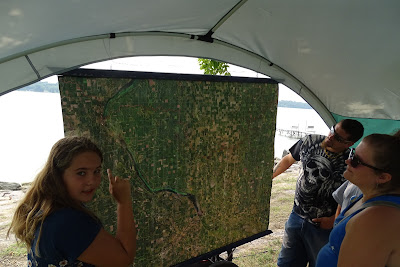 At Cornfest, camper, Nevaeh, shows the public how to sew their "special place" onto the big fabric "Land Markings" map. It was a creative, busy time last week at Big Stone Lake Stories camp at Bonanza Education Center which mostly wrapped up on Friday, August 17th. Some of the campers also helped host the camp's booth with Big Stone Lake Arts Council on Saturday, August 18th at Cornfest in Lakeside Park in Ortonville. Here they demonstrated paper making with Don Sherman, and invited the public to participate in the interactive "Words for Water," and "Land Markings" artworks. Campers also joined Lee Kanten on stage during the Kanten Brothers set in the pavillion to share the songs they'd worked on all week with Lee at camp. From left: Campers Breyden, Piper, Nevaeh, Zane, Caleb, and Addie, perform music with Lee Kanten at the annual meeting of Citizens for Big Stone Lake Earlier Saturday, campers and team members presented the
Post a Comment
Read more

August 14th, 2018: Two days into camp and I already feel like we've traveled so far together. At sunset I was sitting on a dock, listening to the lake. Two fish jumped. There were crickets. -Jonee Kulman Brigham, Full Spring Studio, LLC
Post a Comment
Read more

Participate in the Community Story Map with your phone, tablet, or computer!

LINK: Odes to Big Stone Lake - Crowdsource Story Map   Also found on the story map tab of this website.  What is it?  It is a way to share your Big Stone Lake story as part of a community of lake-lovers. How do you love the lake? Share a photo and a memory, story, poem or any words of appreciation or connection to Big Stone Lake. Your entry will build a community story map. Enter more than once and share with friends. -Now through Corn Fest! Here's one added recently...
Post a Comment
Read more

Can you guess where this is?  The Big Stone Lake Stories team is excited to share this project with you that invites youth from around the Big Stone Lake area to a camp of exploring water through art, science, mapping, hiking, and meeting the many community members that are part of the water story of this place. The camp takes place at Bonanza Education Center, but the experience takes place all along Big Stone Lake. This website is being built right now, to connect you to project flyers and resources. As the camp starts, you'll see GIS (Geographic Information System) Interactive Story Maps grow with detail, photos, stories and artwork by youth. There's also ways for the community to participate with a crowdsource story map coming soon, and activities at Corn Fest on August 18th. Explore the website, and come back soon for more details. Also, for frequent updates, follow Bonanza Education Center on Facebook at this LINK . We hope to see you and hear your s
Post a Comment
Read more